A fearful sphere, whose center is everywhere

In a beautiful article, The Mathematics of Doodling, Ravi Vakil poses two problems:

The first question, at least, seemed connected to another interesting paper, Random polygon to ellipse: an eigenanalysis. Here Elmachtoub and van Loan ask:

One uses geometry, and the other uses matrix analysis to investigate these question but both seems to ask how certain iterations of a geometric body lead to another.

Let’s pose two related problems, and explore two methods that may give insight:

Censor and Elving extend Cimmino’s algorithm to a system of linear inequalities (Ax <= B) to fin one solution (i.e. a feasible point) [Censor83]. The calculation of the weighted centroid was all they needed to revamp, so the geometry of the algorithm remains unchanged. To prove convergence, the authors appeal to the Fejér montonicity [Combettes00] of iterates (cf. with contraction mapping for Banach space). A sufficient condition for convergence in their scheme is that wi > 0.

How does this relate to [Elmachtoub07]?

An early algorithm for solving a system of linear inequalities, A . x <= b, comes from John von Neumann via George Dantzig [Dantzig92]. 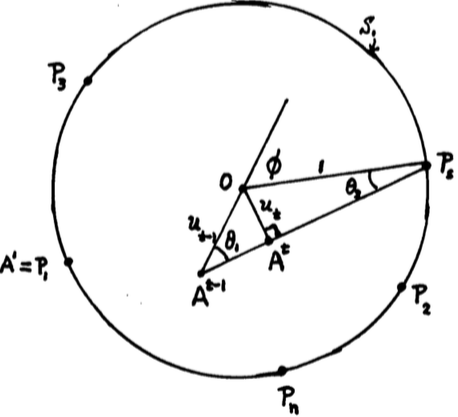 We start with a “standardized” polyhedron:

Unlike Cimmino or Algorithm 1, the centroid is fixed and known as the circumcenter of given points. What the algorithm discovers, while solving the feasibility problem, is the polygon whose weighted point-mass centroid would be this circumcenter. Note that since the algorithm projects points to minimize distance to the center, the number of iterations is independent of the dimensions of the problem (unlike Cimmino). If iterates are normalized, then they are always projected on to the hypersphere, which would be their limit cycle.

Why does a general polygon, under averaging iterations, converge to an ellipse and not to a circle? The short answer is that the affine transformation of a circle is an ellipse. 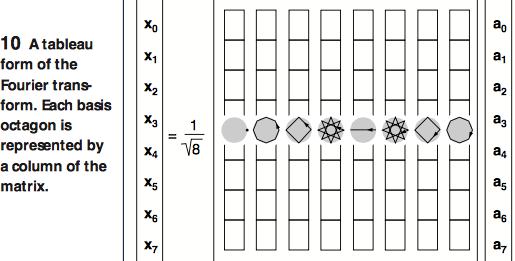 A compelling reinterpretation of the discrete Fourier transform [Glassner99] argues that the transform matrix can be viewed as regular polygons in the complex plane. As a corollary, any polygon can be decomposed into a weighted sum (an affine transformation) of regular polygons.

In any such transformation, three regular polygons are important: $P_0$, $P_1$, and $P_{n-1}$. $P_0$ corresponds on a point, but the other two are regular, convex n-gons. The averaging transformation can now be applied to this sum of regular polygons. As David Radcliffe argues, all component polygons shrink (except for $P_0$) but $P_1$ and $P_{n-1}$ shrink at the slowest rate leaving us with an affine combination of the three shrunk regular polygons converging to an ellipse. While [Elmachtoub07] uses a rather involved matrix analysis to converge a random polygon to an ellipse, Radcliffe’s argument is far more intuitive (and not too far from quantization).

We return to Vakil’s problem. For parallel bodies drawn around a non-empty convex body, $K$, Steiner proposed a volume formula:

The formula, as Vakil notes, is polynomial in the radius, ε, of the neighborhood, and relates volume to surface area. Depending on ε, the volume may converge to an n-sphere, $V(Β_n)$, or to the volume of the convex body, $V(K)$.

A fearful sphere comes from a handful of metaphors. For linear systems, Kaczmarz and Cimmino are basic iterative algorithms, now considered part of projection methods. von Neumann studied the general question - maps of linear operators - of early on. The discrete Fourier transform can be viewed geometrically and applied to geometric shapes. The Steiner formula is a special instance of Minkowski’s mixed volume [Schröder08], and Weyl’s formula for the volume of a tube of a submanifold.

A fearful sphere, whose center is everywhere